I follow a lot of rescue groups on Facebook and on Twitter, mainly because I think of rescue as an industry, an ad hoc and somewhat shambolic industry, but an industry none-the-less. This means that I 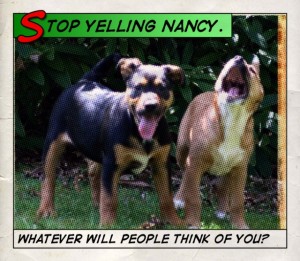 like to know what is going on with other groups, see what good ideas they are having, see how they might be solving problems, marketing to adopters and communicating with the public.

However, I’m frequently surprised about how many groups, or the groups “representing” rescue groups pay so little attention to their social media presence. Sure they use social media, there must be more Facebook pages devoted to rescue groups, groups helping rescue groups and groups associated with rescue groups than there are cute kitty videos on the internet.

The problem is that, like Topsy, they just growed. Instead of treating their social media presence as the window display for their organisation, many rescue groups treat their Facebook page as the equivalent of a bower bird nest, full of random shiny stuff, some of it useful, much of it irrelevant.

Like it or not, rescue has pretty much gone mainstream. Thanks to Pet Rescue, rescue’s profile has never been higher. This means that rescues are competing with each other for fans, for donors and for adopters. And we’re competing against shelters that have marketing departments and communications specialists on tap.

It also means that presentation and reputation management have are increasingly important. In the early days of the world wide web, just having a web page, however amateur, was enough. But as the web became ubiquitous, web sites got glossier and more professional. Nowadays without a professional looking website and your own domain name you immediately look a bit amateur and not very competent.

So the question I’d like to ask rescue groups is, are you using your social media accounts well? Are you curating your content to deliver your message in the most effective way possible to your audience? Have you ever actually sat down and thought about what your message is, who your audience are, and what outcomes you’d like to achieve?

Have you thought about what public face you’d like the world to see, and how you want the world to perceive your group? Are you treating your social media accounts as a communication tool which can build and extend your reputation?

We all know that Facebook doesn’t let your audience see everything your post, but that your audience are more likely to see your posts if they engage with your content, through commenting, liking or sharing.  Are you going to waste that valuable connection getting to people to share content which isn’t yours?

Ask some of your fans to look at your media sites and tell you what they like or don’t like. Ask someone who has some media savvy to give you feedback. Be critical and ask yourself whether your social media presence is telling your story, or just cluttering up people’s news-feeds.

Things I don’t want to see on your Facebook page.

Things I do want to see on your Facebook page.

Here are some examples of people getting it right in different ways.

Rescued with Love: lots of lovely before and after photographs, a personal and intimate without being confessional tone and enough well-reasoned advocacy to make it clear where the group stands on issues.

S.A.H.A Horse Rescue and Sanctuary: lots of before and after shots as well as frequently updated information about the progress of the rescue horses.

Ingrid’s Haven: the cats are the stars and their stories and personalities make very engaging reading. It’s a low-key site, but concentrates on the message, which is cats make great companions.

Pug Rescue and Adoption: pugs are inherently entertaining, align cute pug photos with lame but very funny verse and you’ve got a page which is guaranteed to make you feel good.

The good news is that there are resources to help you get it right.

Some simple rules to help non-profits make good use of social media. http://veevblogs.wordpress.com/2014/08/23/the-share-factor-10-ways-to-raise-awareness-by-making-your-content-viral-friendly/

How non-profits are using social media to engage with their communities: https://nonprofitquarterly.org/management/23837-how-nonprofits-use-social-media-to-engage-with-their-communities.html