Home » The blog » rescuing » A day in the life of rescue

On Tuesday afternoon David from Mildura drives to Broken Hill to pick up animals from Broken Hill pound, a 7 hour round trip. Because of the heat, it’s decided that this transport effort will happen at night, 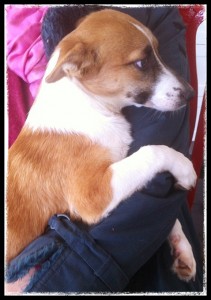 so David arrives back in Mildura at 11pm with several dogs, a cat and kittens on board.

Many of the Broken Hill dogs were in foster care –  the Broken Hill ranger organises a very effective foster care group to provide temporary care for animals waiting transport to rescue. This gets them out of the pound and gives them a head start on care. The pound manager who is also the local vet, helps rescue by holding dogs and cats until they can find a rescue place and transport.

While David is picking up from Broken Hill,  Rhonda and Marshall  leave Temora in NSW on Tuesday afternoon,  driving to Mildura, picking up a dog from Hay on their way. They arrive in Mildura after a seven hour drive at around 11.30pm.

We leave home at five on Tuesday and arrive in Mildura around midnight.

In the forecourt of a locked up servo in Buronga, just across the border in NSW, we all  meet and organise animals onto transport , watering and toileting dogs, shuffling crates and paperwork around to make sure every animal is accounted for.

We are picking up five dogs, a cat and four kittens coming back to Victoria into our care and the care of  two other Victorian rescue groups.

Rhonda and Marshall load the rest of the dogs and drive them seven hours back to Wagga, meeting transport going to Canberra,  finally getting home mid-morning Wednesday. David goes home, but he’ll drive more dogs from Mildura to Melbourne on Sunday.

We drive home, meeting up with another rescuer on the way who picks up dogs and the cats going to her group and another Melbourne rescue. We head home early Wednesday morning to settle dogs in before heading off to our day jobs.

All of this complex effort is co-ordinated by the wonderful Nina who lives in Queensland but spends all her time on the phone organising the rescue of dogs and cats in pounds hundreds of kilometres away.

None of this is unusual or uncommon; the same kind of networks save animals all around Australia every day. Rescuers drive thousands of kilometres, meet up in remote and obscure places, juggle crates and vehicle space like logistics experts in order to move animals from pounds, get them into rescue and eventually into their new homes.

All of this work is done by volunteers in their own time on shoestring funding using their own money and donations from family, friends and supporters.

Pet Rescue currently has 3227 dogs and 3848 cats listed as available for adoption. Started in 2004, Pet Rescue has just reached 150,000 pets rehomed. The vast majority of these animals have been saved, vetworked and rehomed through volunteer rescue groups going quietly about their business of saving lives.

So the next time one of the big shelters says it’s the irresponsible public who are to blame for their kill rates, stop and ask yourself these questions.

If that same public can organise themselves in their own time, on their own dime, to save tens of thousands of lives; how come the big shelters with all their staff, their facilities and their money in the bank can’t even organise themselves to put photos of the lost animals they receive on their websites? The NSW RSPCA says its staff have other priorities than taking photographs of impounded animals.

And if a community based foster care network like Victorian Dog Rescue, operating purely with volunteers and foster carers can have 51 dogs available for adoption, why does the Lost Dogs Home in North Melbourne, one of the biggest and richest shelters in Australia only have 18 dogs looking for homes in Victoria?

Like many rescuers, these are the questions we ponder while dodging roos at 2am on a highway through the middle of nowhere, running on too much coffee and too little sleep.

Maybe its time for the community to start asking the same questions.